No appearances booked at the moment. 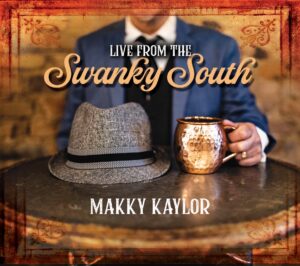 “The Swanky South” experience lavished upon us here in the land of cotton is not merely a thin veneer of aesthetic extravagance. There is an exorbitant amount of refined beauty and elegance in the style, the cuisine, the literature, the landmarks and landscapes to be certain. However, “The Swanky South” to me is more about an atmosphere of extravagant southern charm, graciousness, kindness and hospitality dwelling within the inhabitants themselves and given freely to our locals and our visitors. It’s honest. It’s soulful. It’s joyous. It’s laid back. It’s real. “The Swanky South” to my way of thinking is not the least bit contrived, cliquish or ostentatious. We don’t have time for that nonsense. We’re too busy making new friends and neighbors.

Specifically, I’ve lived and headquartered musically for the last several years in my beloved “Muletown” (Columbia, TN) which is situated snuggly between the gritty rhythm and soul of Memphis and the slick cosmopolitan twang of Nashville. Muletown makes for the perfect musical laboratory for my blend of soul and country-jazz elements. The friendly encouragement of my fellow Muletowners keeps me fired up to create and share my creations.

Stroll the sidewalks of the lovely, historic Columbia square where the deep roots of heritage and the extended branches of eager anticipation collaborate to create healthy new growth. The Old South and New South converge, each with a respectful nod to the other, as buildings are refurbished in the shade of century old trees – a vivid image of how we’re growing and still maintaining our unique slice of Americana. My great affection for the classic musical elements of both Nashville and Memphis have found a perfect meeting point both geographically and musically in Columbia, Tennessee. I think I’m a lot like my beloved “Muletown” – growing yet hopefully maintaining my own unique slice of Americana. This thing I call “The Swanky South.”

If you’d like a little more clarification of what this ‘thang’ is all about in song form, click to hear my tune “The Swanky South.”

Beale Street brewed. Music Row crafted. Makky Kaylor’s original top shelf blend is an intoxicating mix of his authentic ‘Memphis soul meets Nashville classics’ roots with a splash of jazz that is served up stylishly with the singer-songwriter-entertainer’s winsome southern charm. Some call it ‘southern soul’ or ‘country soul.’  Makky calls it “The Swanky South!”

An integral behind the scenes part of the music industry for most of his life, Makky was considered an A-list Music Row session singer for many years singing demos for numerous Hall of Fame Songwriters including Harlan Howard, Wayland Holyfield and Randy Goodrum. During this time Makky also worked as a songwriter for various music publishers including those owned by Willie Nelson, Hank Cochran and Larry Gatlin with whom he recorded a duet.  The smooth soulful vocal stylist was also featured on hundreds of commercial jingles for major products including The Grand Ole Opry, Blue Diamond Almonds, Williams Sausage and many more.

Makky and his music have been featured on The Hallmark Channel, RFD-TV, Family Channel, Circle TV, Heartland, CMT, in motion pictures, as well as major venues including The Ryman Auditorium, Riverbend Centre in Austin, The Tennessee Theater, and many other stages throughout his career. Makky authored “Confessions of a Session Singer” for Hal Leonard Book Publishing sold worldwide, had a principle role in a $15 million theater production at The Miracle Theater for two years in the Smokies, and has had quite a few of his songs recorded by an array of other artists over the years.

Previous Makky Kaylor albums of note include his current “LIVE From The Swanky South!” (2020), “A Little Sentimental – A Storybook Album of Nashville Classics” (2013) and “Glad Tidings” (2002) featuring a duet of his acclaimed original Christmas song “They Saw A King” with Larry Gatlin and The Gatlin Brothers. A brand new studio album is in development and will be co-produced with renowned drummer/producer Mark Beckett (legendary producer Barry Beckett’s son) who is practically southern rhythm and blues royalty and will feature Makky’s inimitable signature smooth, soulfully southern songs and artistry.

At 36, in the midst of a busy career as a session singer for top songwriters and commercial jingles while also a pro songwriter on Music Row, Makky’s heart was diagnosed at a 20% working capacity and three times enlarged. He underwent open-heart surgery just after his 37th birthday to replace his damaged aortic valve with an experimental prosthetic valve. Laying his head on his pillow in the operating room, Makky was armed with God’s promises written on small cards and a prayer “whether I wake in your presence or however my life looks when I wake on earth, I’m yours.” Obviously, Makky awoke. His first words were to say he and wife LeAnn were “going to have a baby girl” even though they had been married sixteen years with no children. Sure enough, LeAnn was already carrying their baby girl though they didn’t know at the time he made the announcement upon awakening after surgery.

He had two strokes headed to a meeting with the guys at Country Road TV in 2019 but God blessed once again with a miraculous recovery. “Everyday is not only a blessing to those of us who are recipients of God’s mercy and grace but also another chance to share light and love with a world in need of it” Makky says enthusiastically.

Makky’s 2020 album “LIVE From The Swanky South!” is as the title implies… His original soulful stylish southern brand of original songs recorded live with his illustrious band of legendary musicians called The Swanky South Players for an enthusiastic full house of fans at Puckett’s on the historic downtown Square in Columbia, TN.

Additional musicians who have played over the last several years on Makky’s original sound blending some of the best elements of classic Memphis and Nashville with a splash of jazz include The TimeJumpers’ guitarist Andy Reiss, Opry drummer Mark Beckett, renowned jazz drummers Bob Mater and Chris Brooks, trombonists Roy Agee and Josh Scalf, tuba master/horn arranger Joe Murphy, back-up queen Vickie Carrico and former Cherokee Cowboy fiddler Derek Pell. “The list of incredible live players who have graced my music over the last several years is filled with not only top cats in the field but just great humans. They bring their own unique rhythm to what I envision sitting at my piano writing these songs. I never take that for granted. Man, I’m blessed,” Makky says.

“LIVE From The Swanky South!” is a celebration of these plethora of players who have added to Makky’s Swanky South music style and also a thank you to the many fans and friends who have kept Makky encouraged and inspired from Memphis to Music Row and beyond through a lifetime of music – and, especially, for his beloved “Muletown” Columbia, TN neighbors as his lifelong music career continues forward.